Welcome back for Week 3!

This past week has been an absolute blast full of fun adventures! We had students report on their readings and three field trips!

We began our week with students reporting on their readings of our assigned books! I did my report on Monday and what I had found to be most interesting in my readings was about book publishing. No one ever really thinks that one can be successful without a publisher or big publishing agency but E.L. James did just that with her trilogy of Fifty Shades! I found that to be extremely fascinating that she became so successful on her own!

On Tuesday, we went on our first field trip of the week to New York City! We started off at a marketing agency in DUMBO (Down Under the Manhattan Brooklyn Overpass) called Big Spaceship. The office was very modern and laid back; they even had dogs in the office! There we met with two women, one who was an EC Alumni named Olga! They spoke to us about how they are a modern company that is very ambitious in the things that they do for their brands. It was cool listening to someone who graduated from Elmira College and seeing her successful!

After touring Big Spaceship, we went on to tour NBC Studios in Manhattan. It was awesome being able to see the sets of the shows that I have watched over the years! We saw the set of Late Night with Seth Meyers, Megyn Kelly Today, and MSNBC just to name a few!

On Thursday, we continued our field trips with a trip to Rochester, Buffalo and Canandaigua! In Rochester, we visited Tipping Point Communications! There we met with Barbara P. who spoke to us about how at their organization they do content marketing in order to stay ahead and get the results their clients desire. We also spoke to Todd C. who spoke to us mainly about how he uses social media to market his ideas and get the word out there for sports among other things!

After Tipping Point Communications, we ventured to Buffalo where we went to the Key Bank Arena. We met with Cara F. and Kevin K. who gave us a tour of the arena and also gave us a presentation on marketing the arena for sporting events and concerts. This was very enjoyable because we got to see the arena from the ice level and from the press boxes at the top of the arena.

To end our day we went to Canandaigua where we attended the New York Wine and Culinary Center, which is now named New York Kitchen. There we were able to try some yummy food such as pretzels and cheese, pizza, meatballs, and chocolate truffles! That was definitely a great ending to our day!

To wrap up our week, we went to Watkins Glen International, in Watkins Glen, New York! There we spoke to Chris and Jose who spoke to us about the challenges they face only being able to host Nascar once a year!

Although this was a very busy week, it was very enjoyable to be able to go to these amazing places and speak to these professionals. I am looking forward to the trips we will be taking this upcoming week!

Hello everyone! This is my last blog for the course. This class has been filled with so many interesting learning experiences. It really has... 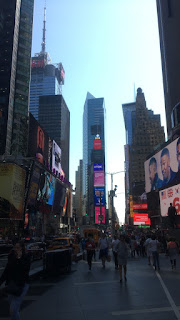